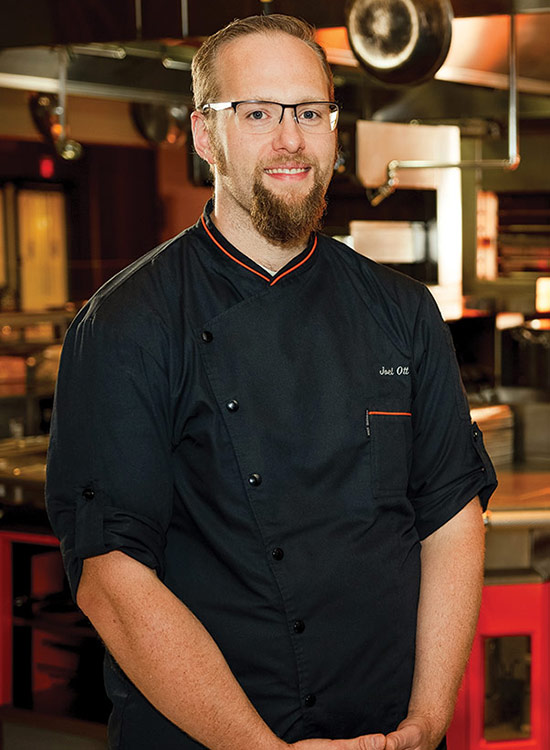 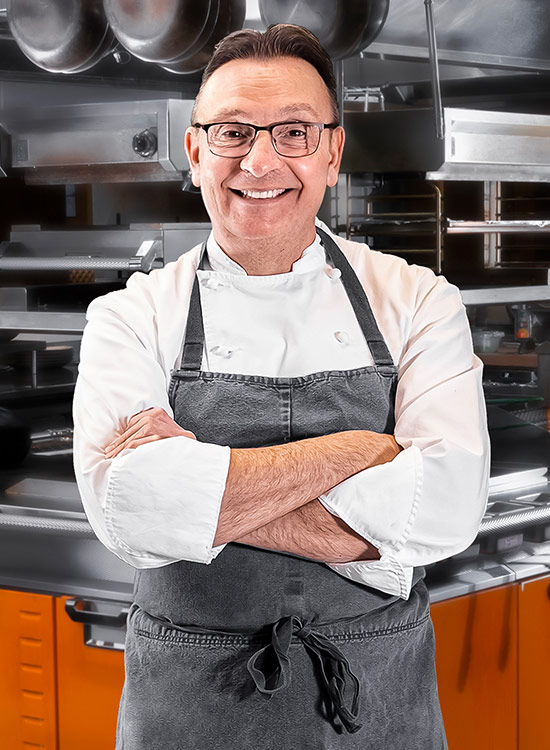 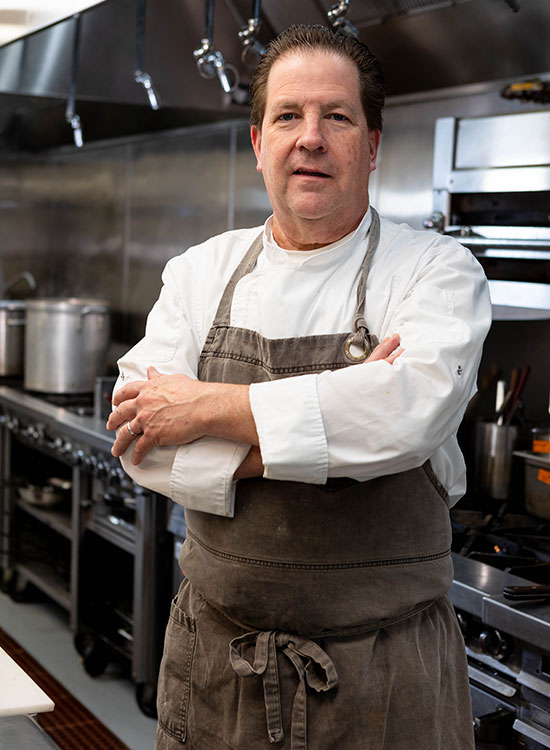 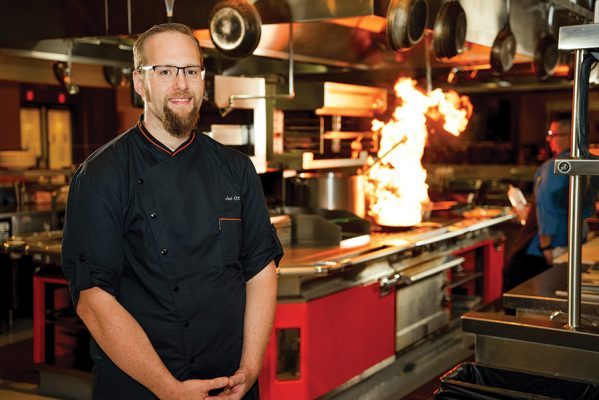 Joel Ott moved from Ohio to Las Vegas at the age of 19 to attend culinary school at Le Cordon Bleu. He subsequently worked for many high-end restaurants and premier properties such as the Loews Resort at Lake Las Vegas, the M Resort Spa Casino, and Koi Restaurant at Planet Hollywood. He made his mark on the Las Vegas Strip spending seven years at the Wynn’s Allegro and Sinatra restaurants and three years as Chef de Cuisine for the Italian restaurant at the Four Seasons. He also worked at Le Cirque, Circo, Picasso by Julian Serrano, and Todd English’s Olives — all at the Bellagio. He joined Ahern Hotel in September of 2019 as Executive Sous Chef and was subsequently promoted to Vice President of Culinary. In September of 2022, he added the role of Executive Chef to his many responsibilities.

From a young age Chef Joel was interested in food, travel and culture, and he developed his passion for food by growing vegetables and herbs in the family’s backyard garden. At 18 his first fulltime job was as a grocery store butcher where he further expanded his relationship with food.

Chef Joel has a passion for cuisine and loves to share his talents, but he also enjoys the new challenges he faces as head of the department. “All of us at the hotel are involved in developing this program from the ground up,” says Joel. “It’s a very interesting story starting with how Mr. Ahern originally bought the property, and it’s history currently in the making.”

As VP of Culinary and Executive Chef, Joel has more than 70 team members reporting to him. He is involved in every aspect of Ahern Hotel’s culinary activities, from planning and executing large banquet events, to creating new recipes for the Trattoria, to assisting in the kitchen as a cook or expediter on busy shifts.

“Now that I’m running a large team with many people, I’ve found that it’s very satisfying to teach eager minds some of the things I’ve learned over the years,” says Chef Joel. “I have nearly a decade and a half of learning from great chefs — trying, failing and eventually getting it right. That’s really the only way to truly understand and master a dish.”

Chef Joel spends as much time as he can with his wife Michelle, his two-year-old daughter Malia and his son Jaxon, born in September of 2022. “Having children has definitely changed me as a person and made me even more driven to succeed, but that success is defined differently,” said Chef Joel. “I want to provide well for my family, but also be present, and in this industry that can be a very difficult balance to strike.”

When he does get time to himself, Chef Joel is out enjoying Las Vegas’s beautiful natural surroundings — either kayaking out on Lake Mead and the Colorado River or hiking around Red Rock Canyon and Mt. Charleston. 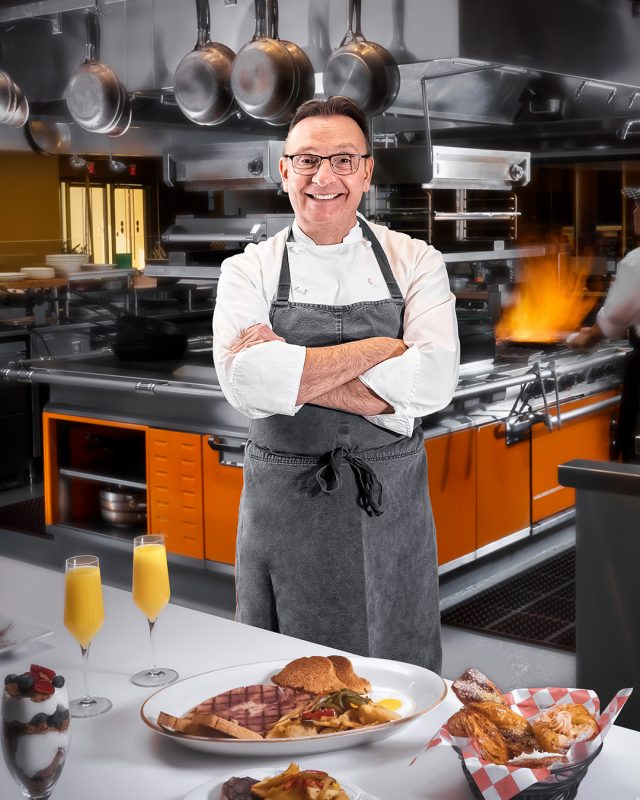 A veteran of the Las Vegas dining scene, Chef Bruno Morabito honed his award-winning skills at various world-class restaurants throughout Las Vegas before taking his talents to the Ahern Hotel.

Chef Bruno brings a wealth of culinary experience to the Trattoria by Chef Joel. His love of cooking began as a teenager growing up in Rochester, NY. After high school he attended a culinary school in Ontario, Canada, and was exposed to a variety of different cultures and cooking styles. Chef Bruno moved to Las Vegas in 2000 where his culinary career quickly took off. His first job was at Lutèce, a French restaurant at the Venetian Resort, where he was quickly promoted to Sous Chef. Chef Bruno also worked at Aureole at Mandalay Bay before moving to Chef Thomas Keller’s Bouchon, an award-winning French bistro at the Venetian. At Bouchon, Bruno was promoted to Sous Chef and was instrumental in bringing breakfast and brunch to the restaurant. He introduced chicken & waffles to the menu and it became the restaurant’s most popular dish.

Forbes Traveler magazine named Bouchon’s brunch as one of the best in America, and Chef Bruno has won numerous awards for breakfast and brunch throughout his storied career and has been named the Master of Brunch by the blog “Vegas Unfiltered.”

In 2014, Chef Bruno was recruited by Italian-born celebrity Chef Giada De Laurentiis to be the Chef de Cuisine at her first-ever Las Vegas restaurant Giada, a trendy eatery at The Cromwell Hotel in Las Vegas. Chef Bruno set about creating a breakfast and brunch menu, adding his signature chicken & waffles to the menu, of course, but giving it an Italian twist. Giada captured “Best Brunch in Las Vegas” award honors from the Las Vegas Review-Journal in 2016 and The Best Power Lunch on the Strip. Chef Bruno then joined Sid’s Café at the Westgate as Chef de Cuisine in 2016 where he set out to launch new menu items and won one of the Best Breakfasts by the Las Vegas Review-Journal.

Chef Bruno enjoys frequently strolling through the dining room at the Trattoria by Chef Joel and interacting with customers to check on their dining experience, as well as discussing new and exciting menu items. “I love to connect with people and chat about their meals and experience,” says Chef Bruno. “By creating memories through food, you create great relationships that people relish, ensuring they have fond memories of their experience at the restaurant.”

When Chef Bruno isn’t in the kitchen, he can usually be found hanging out with his twin daughters or at a sporting event. He’s also an avid horse racing fan and attends the Breeders’ Cup every year. 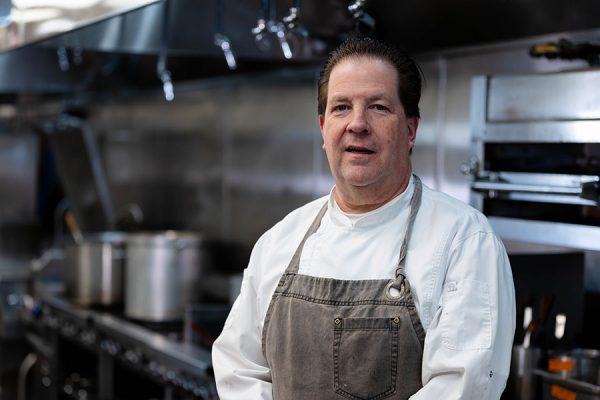 Chef Mark Casper graduated from Johnson & Wales University in Providence, RI, in 1992 with an Associates of Occupational Studies in Culinary Arts and a Bachelor’s Degree in Food Service Management. After starting as a cook and working his way up, he held positions at numerous hotels in San Diego, CA, eventually landing the role of Banquet Sous Chef at Sheraton Hotel & Marina where he remained for eight years.

Wanting to expand his culinary skills, Chef Mark then took a job as Executive Chef for Culinart, a company that specializes in corporate dining, where he was in charge of multiple venues during his nine years with the company. This included running the cafeterias for Qualcomm headquarters and the renowned Salk Institute.

After moving to Las Vegas, NV, in 2014, he worked the Nevada State College account for Culinart. He then spent three years at Treasure Island Resort as Assistant Room Chef before being hired by Ahern Hotel as Banquet Chef.

Chef Mark says he appreciates being part of the great culinary team that has been built at the Ahern Hotel. “I love the flexibility we’ve been given,” said Chef Mark. “It gives us the freedom and ability to create new dishes and procedures.”

Outside of work, Chef Mark likes spending time at home with his three dogs and enjoys woodworking projects and gardening.